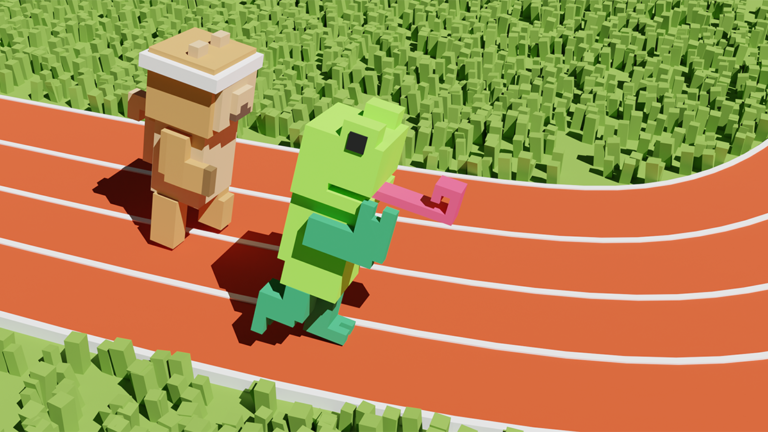 We’re back with an update that includes a new game mode and a bunch of features you guys asked for here on Steam and over on our Discord server ( http://discord.gg/unrailed ).

First of all, we are trying out a new game mode – “TIME-MODE” by name – that lets you race against the clock, and puts you against a randomized order of biomes.

Next, we’ve added “auto-save” feature to the checkpoint system: In your savegame list, there should now be a last visited checkpoint as first entry. The savegame won’t be deleted when opening it and should hopefully reduce the amount of lost savegames. Just keep in mind that there is currently only one such slot, so if you start a new checkpoint game, the slot will be overwritten by the last checkpoint of the new game. Also note that you can still save at any station or at the last checkpoint just as before, independent of this feature.

The kick system has also been improved, now the host has the complete power over who gets kicked which prevents other players from joining and kicking the host. Otherwise, two (non-host) players can also votekick somebody out. You can kick via [ESC]->[Manage Players]. Votekicks should appear as information popup for all other players.

There is also now a statistics menu that shows you a lot of stats from the game – like how many trees you chopped and how much time you spend on mars.

And finally, we’ve fixed a lot of the bugs you reported on the #Bugs channel on Discord.

As always, should you have some feedback or if you find bugs we haven’t fixed yet let us know here or on our Discord server.

*New: Time-Mode Beta (non-crossplayable so far, use the extra lobby button in the online menu)
*New: Weekly-Challenges (Only available in local lobbies or online time-mode-lobbies) and will be displayed in the highscores
*New: Statistics menu (Can be opened from the progress menu. Note that while many statistics have been recorded from quite old versions on, some have just been added and start therefore from zero.)
*New: force-https and force-http command line parameters
*New: “choo-choo”-sound when dashing the engine
*New: The last checkpoint will appear as AUTOSAVE in the savegame-open-dialog and will not be deleted when opening it to make the checkpoint system less frustrating in case one forgot to save the last checkpoint explicitly
*New: FNA3D version now default for macOS (giving M1 support)
*New: Possibility to generate maps in kids mode without enemies (bandits, yetis, ghosts & blobs) when adding the line disableEnemiesOnKidsDifficulty True in the settings.txt (%localappdata%/Daedalic Entertainment GmbH/Unrailed/GameState/AllPlayers/settings.txt)

*Crash fix: Possible crash during online matches or replays when a player was just joining and when having the name-box open
*Bug fix: Sandbox change-speed-button triggers the button sound when being ingame
*Bug fix: When train wagons crash, commodities might float in the air and engine-smoke might appear
*Bug fix: The lava-blob might ignite the train eventhough the blob was already extinguished by a client in online sessions
*Bug fix: The bot can teleport commodities in its hand when not being able to reach its destination
*Bug fix: The bot is sometimes in a temporary pick/place loop eventhough it could pick up rails when being in the fill-box-state
*Bug fix: Ping speech-bubble did not get destroyed when the player went to remove input
*Bug fix: The bot could redirect the tracks when the tracks were already connected to the station (always leading to a train crash)
*Bug fix: When using split controller and the controller disconnects and reconnects, the game did not correctly recognize the mapping anymore
*Bug fix: Controller types (Xbox/PS4) was arbitrary when both types were connected.
*Bug fix: When saving and loading the game with a milk-wagon, the milk in the wagon did not have any perks anymore (only fixed for savegames created with this or a newer version)
*Bug fix (2nd attempt, please notify me if it still occurs): Music sometimes stopping after dynamite explosion
*Bug fix: Collector sometimes stuck picking up a commodity which is already full
*Bug fix: Compass wagon level 2 not displaying anything
*Bug fix: Some characters are appearing as N (especially in chinese)